Meghan Markle made a subtle reference to her late mother-in-law. Meghan, who attended the 2022 Ripple of Hope Gala with Prince Harry on Tuesday evening, wore a special piece of jewelry once owned by Princess Diana.

Meghan looked stunning in a white off-the-shoulder dress with a thigh-high slit, combined with a black purse and matching black shoes, but it was her stunning blue ring that stole the show.

It’s not the first time Meghan has donned the jewel. She previously wore the stunning gown to her wedding reception.

At the time, a Kensington Palace official told that the aquamarine ring belonged to Diana and was given to Meghan by Harry on their wedding day.

Diana was spotted wearing the ring at a Christie’s fundraising event just weeks before her untimely death in August 1997. She was also seen wearing it in Australia the prior year. 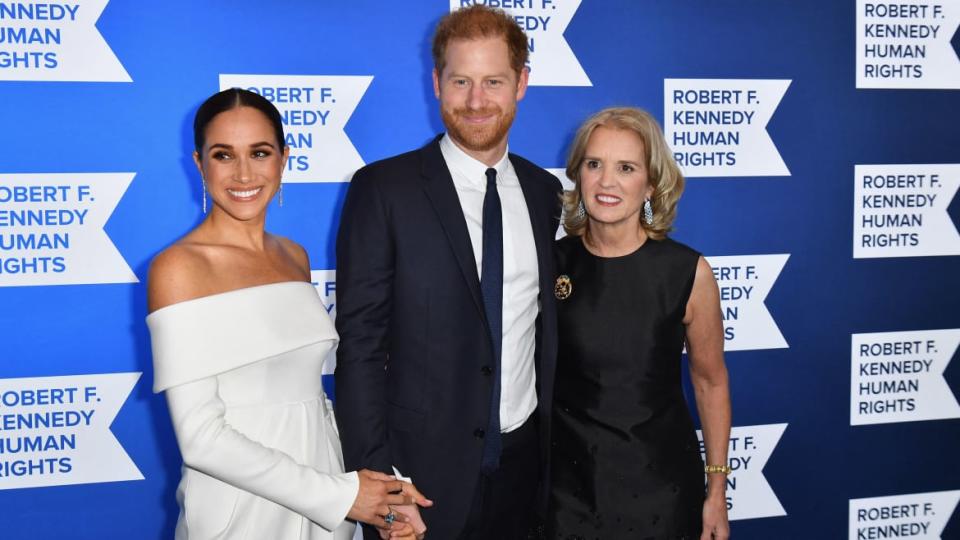 The brilliant, emerald-cut ring was visible in images shot on Harry and Meghan’s wedding day when the joyful bride waved to guests as she and the Duke of Sussex left for their private second reception.

The ring was the perfect accessory for Harry and Meghan’s special evening on Tuesday when they were awarded the Robert F. Kennedy Ripple of Hope Award, which highlighted their human rights efforts in mental health, racial injustice, and social impact through the Archewell Foundation.

The duke and duchess arrived in New York City on Monday. The couple, who have two children, Archie, three, and Lilibet, one, arrived at JFK airport in a private plane. After arrival, the pair showed off their airport elegance by getting into an SUV.

Harry sported a white button-down shirt with black slacks and a backpack, while Meghan chose an all-black ensemble with stylish sunglasses.

The distinction comes only days before the release of their six-part Netflix docuseries, Harry & Meghan.