Green Bay Packers quarterback Aaron Rodgers entered the game against the Philadelphia Eagles knowing he was playing with a broken thumb, which he had stated earlier in the week would not prevent him from playing.

What the Packers didn’t expect was Rodgers to leave the game early in the 40-33 loss with a rib injury, which could keep him out for several weeks.

It’s not a given, but based on Rodgers’ post-game press conference, he wants to be back on the field next week against the Chicago Bears.

“As long as I check out fine tomorrow,” he told reporters, “I’ll expect to play this weekend.” “I might not be able to go on Wednesday, but as long as there isn’t any major structural damage, I’ll go out there.”

Rodgers explained that it was a combination of a direct shot to the ribs and landing on them twice, once in the second quarter and once in the third.

“I’m just having trouble breathing and rotating my upper body,” Rodgers explained. “I was also concerned about a punctured lung and wanted to rule that out.”

Fortunately, the lung is fine, but Rodgers admitted that preliminary tests could not definitively show that his ribs are not broken. More tests will be performed on Monday to ensure that the back-to-back NFL MVP’s diagnosis is correct.

With the Packers now 4-8 on the season, there’s also speculation about whether Rodgers wants to play on with playoff hopes dwindling with each loss.

He even stated that the team might have to win their next five games while also receiving assistance from other teams in order to qualify for a wild card berth.

However, as long as there is hope, the 38-year-old signal-caller would like to be under center.

“I don’t want to take my mind there,” he said, “but as long as we’re mathematically alive, I’d like to be out there.” 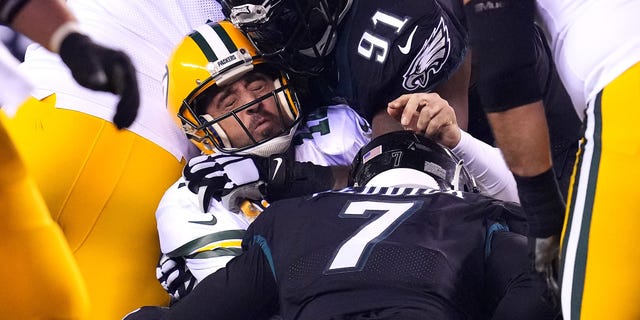 Rodgers apologized to head coach Matt LaFleur because he couldn’t keep going in the game, but he didn’t want to hear it.

“This is one of the toughest guys I’ve ever met. I’ve never questioned his toughness.”

But LaFleur didn’t want to speculate about his quarterback situation next week or in the future, as Jordan Love could make his first start since Week 9 of the 2021 season when he was the 26th overall pick in the 2020 NFL Draft.

“I expect Aaron to be out there if he’s healthy and ready,” LaFleur said.

When Love replaced Rodgers in the fourth quarter, he quickly found rising star Christian Watson for a 63-yard catch-and-run. With that touchdown pass, he finished the game 6-of-9 for 113 yards.

“I’m not surprised that he went out there and performed admirably. This is something we see on a daily basis. People may not always agree with me, but I see it every day “Love, according to LaFleur.

Rodgers also stated that he was “proud” of Love’s accomplishments.

Regarding his thumb injury, Rodgers stated that it felt better this week than it did last week, indicating that it is improving as he continues to play through it.

But the Packers’ focus has shifted to the latest, more serious Rodgers ailment, which could keep him out even if he doesn’t want to be.

In the loss, he finished with 140 yards on 11 of 16 attempts, two touchdowns, and two interceptions.